Joined Jun 14, 2010
·
1,602 Posts
Shelby's having her hips & elbows xrayed today.
She couldn't understand why she didn't get any breakfast while Barney had & then didn't want to go to the cage at the vets so I had to go inside with her and then she was fine.
Our vet (she's orthopaedist) promised me to give me a call straight after xrays so I'll know the results before they come from BVA.
► Show Full Signature

Hope the results are ok

Diana said:
Are you scoring them for breeding, or does she have a problem in both ends? Poor girl if so!!! If for breeding, yoour vet can give you a vague idea of whether they are 'Ok' or 'rubbish', but only the BVA, in 6 - 8 weeks, will be able to give you the true score picture so don't go *too* much on what your vet says beyond a 'nod' or a 'sad shake'.....

Thanks God she hasn't got any visible problems with her legs; we're scoring her joints for potential breeding. I'm aware that my vets opinion doesn't mean much & that's BVA's role to score - but my vet can tell what she thinks about her joints & then we'll be waiting for oficial scoring
Thank you
► Show Full Signature

We were told Pippa's hips/elbows were very deep and should have very good scores.

Results took ages to come though!

Good luck for nice low scores, I've got two to do this year, I doubt Zasa will be as low as her mum but as long as they're low and even I don't mind!
► Show Full Signature

Joined Jul 28, 2013
·
429 Posts
what scores would you class as good, meduim and plain 'don't go there' for breeding?
► Show Full Signature
Dileas mum

The breed average for a total of BOTH hips added together sits at about 15.

Thats the bare facts of the case. Looking behind a dog to see its sibling, parents and grandparents scores can also play a factor in deciding on the most complicated hip score results back such as 'higher than you wanted'. BUT... very roughly...

But there *is* more to it than that in making a decision on a score as regards going ahead to breed. Such as.... lets say a dog got a TOTAL score of 15... so 'alright', not 'brilliant' but 'alright'.

Joined Jul 9, 2013
·
1,448 Posts
I think it depends on your viewpoint and your own experiences, when I got my first Labrador, which wasn't that long ago, everyone was saying *around the BMS* was fine, so a few points above was perfectly acceptable. Yet now, only a few years later, it seems like if your scores come back over the BMS it's a terrible disappointment. Indie and Tau are from the same bitch, Indie's hip score is 3/3 and Tau's is 0/0, yet their dam has a 10/9 score. I never bred from Indie as her elbow grade came back as a 2, but Tau was another 0 thankfully. It's also worth remembering that the BMS has lowered over the years, so what might look like a bit of a higher hip score, might have only been a couple of points off the BMS back then.

I wouldn't mind anything around the BMS and even, we'll just have to wait and see. That's 9 for flatcoats, and 14 for Labs currently! There aren't many flatcoat people who do elbow grading at the moment.

I think the KC are/have revised their advice re elbow grades, and it's now only recommended to breed from a 0, not a 1 I think, although I could be wrong about that. It still doesn't stop people though, it is heart breaking to get a [email protected] score back, it's a bit of a double edged sword, at least people have gone to the effort to find out the status of the hips/elbows, but then some people still completely ignore higher results, there's plenty when you read through the BMS willing to breed from higher scores/grades.
► Show Full Signature 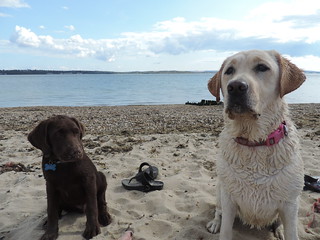 "Shelby Cobra" has a fabulous black body and now You have the proof that she has a classy chassis!!! ("Mr Mibec" will understand :wink: )